The year has almost come to an end. 2015 is just a couple of days away and everybody is preparing their New Year`s resolutions (myself included).

I find it only fitting to write a post about how those college years should help you get the job of your dream after you graduate.

Everybody told me, after I graduated, that I should have done an internship, volunteered anywhere, with any organization just to get a head start. People also told me that I should have worked in college, if not for my financial independence, at least for a better looking resume.

I didn`t do any of these and, as I told you already, I found refuge in more studies: Masters, PhD etc. I also started working a few months before I graduate, even without all that “good-looking-in-resume” activities. But that was a consulting job, where I worked for a year and a few months. This time I did it for my financial independence (and to afford a roof over my head). 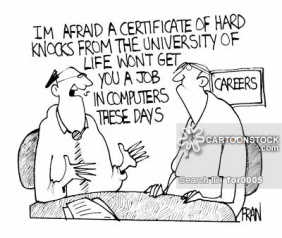 Let`s talk about my friend Greg. You remember Greg, don`t you?!

After high school, Greg started his Bachelor studies. During the first year (out of five), he started volunteering for a no-name NGO which, actually, had no activities. He quickly move up the ladder mainly because there were just a few members (beside the founders) so everyone got a title of manager of something.

In his third year, he applied for several management trainee programs with multi-nationals and managed to get into one. It was a 6-months program where he only did administrative things instead of learning about management (or anything else). After this management trainee program, he started participating in business studies competition (at national or European level). He never won anything, but that wasn`t his fault. He worked really hard each time.

In his last year, Greg got a job. It was an entry-level job in a small consultancy company. He quit it after he graduate and, in a few months, got a job (also entry-level) in a major international consultancy. After three years of work, he quit that also (even if the money was great). He then started his own company with some friends in innovation management, company that handles multiple programs with companies and international organizations.

The point that I`m trying to make is that, during your college years, you have to learn, work, volunteer. Learn new languages, new software, things that you don`t believe you`ll ever need. But things that will come in handy if you ever do. College is not only a time to party or to cram for exams. The knowledge you get there is useless when it comes to getting a job.

Think about it: hundreds of people graduate each year with the same diploma, same knowledge you got. Who would employers hire for one position advertised?